We need to realize that any stress hurts vulnerable sections of the community disproportionately than others – aged, poor, infants, sick, etc. Focus of action should be on increasing the distance of the climate impact for such groups.

All citizens are making choices all the time. Every decision adds to the carbon footprint. We need better information and more sensitivity to make decisions that increase our handprint. Every right choice, however small, is a step in the right direction.

Researchers and innovators must be motivated to pursue solution research for both mitigation and adaptation. Some mitigation issues are:

Under adaptation we need to focus on:

Blaming neighbours for their actions or lack of actions does not reduce our problems. 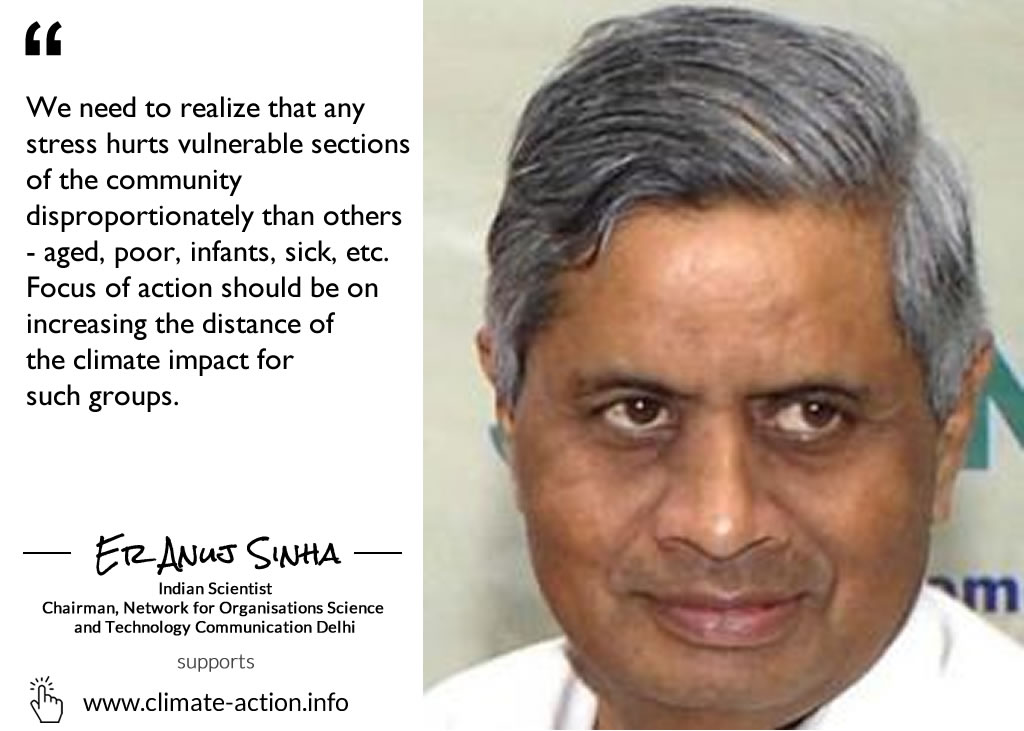 Er Anuj Sinha is Chairman, Network for Organisations Science and Technology Communication Delhi. He is engaged with Science Society and Public India. He is a highly decorated science communicator who led Vigyan Prasar, NOIDA in Uttar Pradesh (a national laboratory for science communication) for two years (2010-11) and was Head and Adviser, Science Communication Division, Department of Science and Technology, Government of India, New Delhi for ten years (2000-09).

He has over ten years (19772-81) of field experience as a Chemical Engineer in a process industry in Bihar and also served with distinction the Bureau of Industrial Costs and Prices New Delhi for three years (1982-85). He piloted many policy and programme initiatives of applying science to society and has been involved in all major science outreach campaigns in the country for the last two decades (1985-2009).

He has authored a book on ‘Nuclear Energy’ and is writing the next one on “Women and Technology”. He has contributed scholarly chapters to technical books incl. Women Technology and Development (2013), Bridging the Communication Gap in Science and Technology (2016), Urban Planning (2017) and written several articles on ‘Science Communication’ in popular magazines and newsletters. He is widely travelled within India and abroad including US, UK, South Africa, Japan, Sri Lanka, Belgium and Malaysia.

He has earned degrees of B Tech, Nagpur University (1971), MBA, Delhi University, (1989) and MSc, London University (1990). He is a Hony Fellow of Indian Science Writers Association, New Delhi and Bioved Research Society, Allahabad. He was bestowed Saraswati Putr Samman in September 2017.