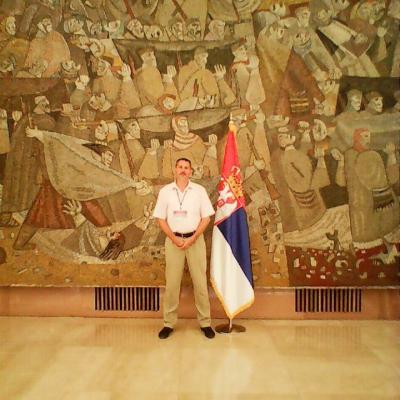 Co-teacher: Biljana Jovancic, Spomenka Rakic, Vesna Manojlovic
I was born on 6 July 1971, in Ruma, Yugoslavia. I graduated from the Mathematics Grammar School in Ruma, after which I had to go to the Army (military service was mandatory in SFRY). While I was serving, a war broke out in the country, in which I did not want to participate. After I returned from the Army, I briefly studied at the Faculty of technical sciences and the Faculty of Philosophy (Psychology Department). After that, I enrolled the Faculty of Orthodox Theology of the Serbian Orthodox Ch

I was born on 6 July 1971, in Ruma, Yugoslavia. I graduated from the Mathematics Grammar School in Ruma, after which I had to go to the Army (military service was mandatory in SFRY). While I was serving, a war broke out in the country, in which I did not want to participate. After I returned from the Army, I briefly studied at the Faculty of technical sciences and the Faculty of Philosophy (Psychology Department). After that, I enrolled the Faculty of Orthodox Theology of the Serbian Orthodox Church, Ethics Department, from which I graduated with grade 10 (study of innate archetype of God in Homo Sapiens as a species). I am a member at Best Teacher-Ex Yugoslavia, the Serbian Music Authors Organization SOKOJ – I have written more than 100 compositions, and I play 10-15 instruments. In my spare time I also engage in audio production. Apart from music, psychology and philosophy, I also take interest in developments and innovations in the field of pure energies. Since recently, I am also an ‘adviser for innovative technologies’ to the President of the Eco-Commerce Institute of Serbia, Mr. Slavko Vujovic (Mr. Vujovic is a rewarded inventor and a member of the Chamber of Commerce of Serbia and Austria).
Information about current profession
I am working as a catechist for 12 years now. In my pedagogical work, I have patented new methods of ‘learning through play’, applying depth psychology on the educational process (or, applying my thesis in practice). Also, I introduced the concept of lifelong work with students, when needed. This year, I took part in competitions in 8 various fields, with generations 2002/01/00/99/98/97/96/95/94/93/90, and my former student Biljana (born in 1989) was my associate in various projects.
Through systematic support provided to students and by participating in various competitions, we gained beneficial friendships and made business connections across the world. I have provided for my poor, small school (attended by around 300 students from surrounding villages) cooperation with one of the biggest audit companies in the world, Ernst & Young (UK) - consultations, workshops, practical work for students and support to my school (EY has been declared the world's most desirable company to start career at, in 2008). Furthermore, I enabled cooperation with KPMG (Netherlands), also from the Big Four. The goal of this cooperation is modernization of the existing and introducing of new educational profiles.
“Rosatom” is the third global leader (energy sector) with which I started to cooperate. Yesterday, at the Serbian Chamber of Commerce, we agreed upon 3 projects – replacement of traditional vehicles of Belgrade (the capital of Serbia) public transportation with electric vehicles, installation of our chargers in Russia and, in principle, a global center for mechatronics. We are expecting a visit from our partners from Russia soon, as well as implementation of the project (the final negotiations always include my best students).

Motives and views
Economy is not an area of my interest, although I have a great talent (my father was a successful economist, but it has costed him dearly, so I always ran away from my talent for economy and used it as the last resort only – when it was necessary for the children and the collective). I was hoping, and I still hope that this cooperation with economic giants of today will allow us to survive as a school, since our school will probably be shut down next year. For this reason I took part in various conferences, discussing amendments to the law on ombudsman, inclusive youth policies, promotion of GIZ Good Practices Bulletin, networking of youth workers (at the Belgrade Assembly)… I established cooperation with the Provincial Ombudsman and the Commissioner for the Protection of Equality (my student is an active member of the youth panel, providing consultation to the Commissioner)… I participated in trainings provided by Tempus and ERAZMUS+ foundation…
I received the highest awards for my work - the Institute for the Advancement of Education of the Serbian Government included me in their ‘List of the most successful educational and extracurricular activities in Serbia’ (listed as first, for the project for supporting talented children, ‘Dragon in Green Socks’). I have also been included in the ‘Good Practices Bulletin (VET project of the German Government and German investment fund GIZ (Gesellschaft für Internationale Zusammenarbeit). As I write this, I was informed that I entered the final round of the national competition ‘For the best educator’, by your partner-organization Zivojin Misic from Serbia (the results will be known in October). I was nominated by the HR manager of EY, Dr. Sonja Jovanovic.
I do not deal with support to the talented children exclusively – I believe that ALL children are gifted, so I helped every child who wanted me to (they did not have to do an IQ test and fill out a questionnaire in order for me to be their mentor). The first award I received, the Charter of Charity (2008), was from the ‘Center for children and youth with disabilities’ in Veternik, for supporting disabled children (this is when the poem ‘The Dragon in Green Socks’ was written, after which we were named). Then came the ‘Mentor of Talented Student’ award (from the Government of AP Vojvodina), as well as the award of the Ministry of Education of Serbia, for ‘professional contribution to the literary section of the elementary school’, and the following year I received the same award for high school section. I received similar recognitions in Montenegro (‘for extraordinary literary work with children’), Germany, Italy (in the Castelo di Duino competition of the Italian Ministry of Foreign Affairs and UNESCO, we received awards for a school project on three occasions).
I used all the awards for promotion of children, the teaching profession and various useful projects. I will mention one interesting experience – with one diploma awarded to a 12 year old girl, we painted all school facilities, the Health Center and the kindergarten in the municipality of Pecinci. I used an award from a literary competition (1100 participants competing) to receive the funds for publishing a collection of poems. We planned to use the proceeds from the book sale for painting our two (neglected) schools. Truth be told, we sold the books to people who, in most cases, never read a single thing, but they could not turn down children who wanted to fix their own school. Since they ‘had’ to buy the book, the locals complained about me to the Principal. The Principal warned me to stop, the municipal authorities requested that the Principal fires me, the priest protested… However, this gave me energy to sell the book quickly, hire handymen and paint one school, and after that to pursue donation for continuation of works and finish painting the other school! This was not the end of it – in other municipal villages parents started to protest ‘why are not other schools painted too?!?!’. Thus, the municipality had to take care of all other schools and public buildings.
This is how, with one diploma, we instigated the municipal authorities (forced, rather) to paint a few thousand square meters of premises in which the children were staying. Some classrooms have not been painted for 20 years and more… The schools were slowly getting in shape, so, thank God, this year we got a new school building. It is my pleasure and honor that we brought about these positive changes with our poems and pure hearts – or, we have been a part of them at least.
As a result of similar actions, my students are organizing big and important projects on their own, without my help (for example, the ‘Film Caravan’, under the Catch a Film international film festival, which is dedicated to fight for the right of the disabled. The Caravan was independently organized by two underage girls (who would later become trainees at EY).
Currently, I am working on the Global High School Center for Mechatronics, Robotics and Pure Energy, in cooperation with an international group of electronics experts (IEEG Stara Pazova, the Republic of Serbia) and all people of good will and good vision who want to take part in the project. 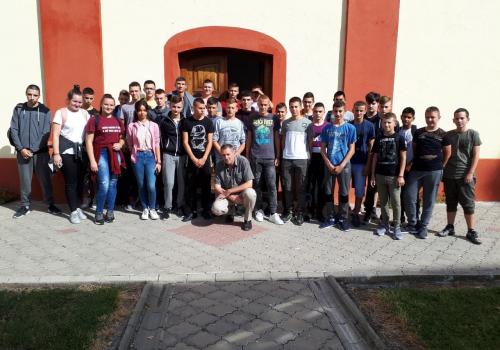